The Metal Gear Solid is a bizarre series. Personally I’m a fan of it, I like the ridiculous and the over the top, and so the MGS franchise suits me well. Of all the crazy MGS stuff, and trust me if you haven’t tried the series, there’s a lot of bonkers stuff, one item in particular has perplexed me for decades, that item is the PAL key. The PAL key or the Permissive Acton Link key is an emergency disc that is used to activate or deactivate nuclear weapons. That’s all fine and good but it’s the actual disc and how to use it that I want to talk about today. Obviously this is going to contain spoilers for Metal Gear Sold but nothing too spoilery. If a memory card reading, gas mask wearing, levitating psycho hasn’t persuaded you to play the MGS series then my mild spoiler shouldn’t turn you away for good. With that, let’s talk about PAL, pal! 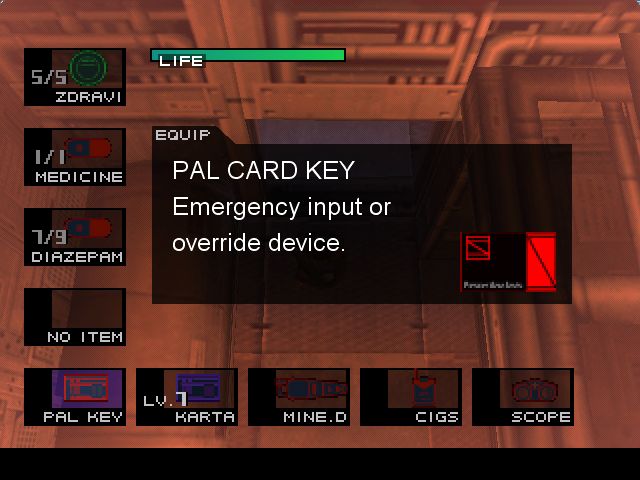 Towards the end of Metal Gear Solid you discover that the enemy, Liquid, has started the activation process for the nuclear weapons. Not good news. So you, as Solid Snake must deactivate the nukes. Previous plans have failed but you discover the emergency option, the PAL key. In an emergency, 3 discs of data can be input into 3 computers to either activate nuclear weapons or disarm nuclear weapons. These keys are one use and if you mess up the input order or input the same disc by mistake then you’re all out of luck. As Eminem said, ‘You only get one shot, do not miss your chance to blow nukes’. Pretty sure that was it or close enough anyway, clearly he wrote that rap whilst playing Metal Gear Solid. So Solid Snake checks his infinite pockets and wouldn’t you know it, he only has one PAL key. He gets on his walkie-talkie to his urine soaked scientist buddy Otacon and has a bit of a moan about only having one key. Otacon explains that that PAL key is a 3 in one key. It’s designed with a special Shaped Memory Alloy which allows the key to transform shape so that different discs within the key are readable by a disc scanner. I believe that’s correct, the MGS series is confusing. When in doubt, nano-machines did it. For those who are reading and don’t know what nano-machines are to the Metal Gear Solid franchise, they’re whatever you want them to be. It’s that bit from The Simpsons where Professor Frink asks a really specific question to Lucy Lawless about an episode of Xena where a really specific detail was wrong. And then she responds with this: 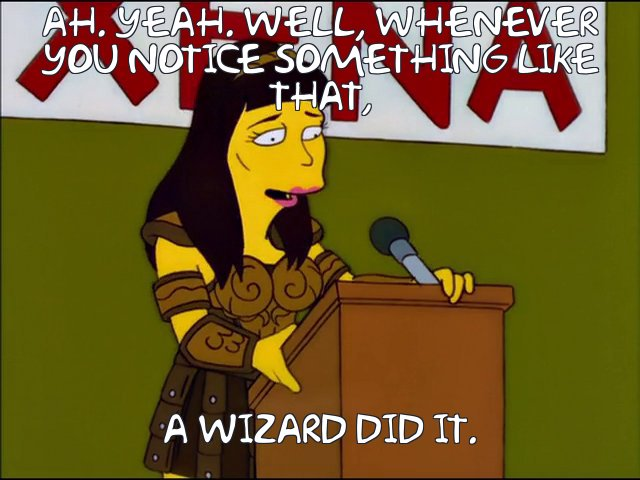 Just replace wizard with nano-machines and you’re an expert on the Metal Gear Solid experience. Again, I must reiterate, I love the series for reasons like that.

Back to my PAL! So, this disc can transform and needs to transform for it to be used properly. How do you transform it? I hear you ask. Simple really, by severe changes in temperature. And by severe I mean Sweaty Betty or Chilly Willy. Rubbing the disc in your hands isn’t going to heat it enough and to cool it you can’t just seductively rub ice cubes on it like it’s Kim Basinger. Extreme temperatures are needed to get those 2 states and the 3rd state is just room temperate so that isn’t a problem. To get the key to cool enough you need to head to a freezer area of the facility and wait in that area for the PAL key to cool enough. Once it does, the icon for the item will change to a blue disc and you can then use it on the suitable computer. To increase the temperature of the disc sufficiently, you have to take Solid Snake to a furnace area and have him wait till the disc heats up. Once the disc is heated up, you must make your way back to the computers and input the disc into the correct disc drive. Sound like fun to do in a video game? Of course it is, everyone loves backtracking!

So where is my issue with this? Well, the existence of the PAL key is for emergencies. A trip to a freezer and then a furnace, does not sound like an emergency that is swift, and speed is usually what emergencies require. It’s not like a scientist can pop this PAL key into a microwave to heat it up. Have you ever put food in a microwave that had a small piece of aluminium foil attached to it? I have and I might as well have got the sparklers out and set up a bonfire. Then there is the case of the journey to and from the freezer and furnace. Solid Snake is a clone of Big Boss, the greatest soldier of all time. A high mark for fitness and stamina is required to earn that title. Him running to and from in a timely fashion I can accept. But a regular person? Unless they’ve got Usain Bolt in a lab coat, I don’t think they’re getting those discs anywhere sprightly. An average Joe scientist will be doing a run for 2 minutes, then with winded breath that becomes a jog for another 2 minutes and then a brisk power walk to the freezer. That doesn’t include the trip back or the furnace expedition. BOOM the nukes have detonated and the super mutants are being born.

Giant mechs that roar like a Bionicle T-Rex? Sure, I’ll bite. CD’s that require a hot water bottle and a slushie nearby? Yeah, OK Kojima, where are you hiding the glue? Anyway that’s my shower thought for the day. More than likely I’ll be returning to the MGS series in the future for Inventory Time but in the meantime feel free to check out my thoughts on The Legend Of Zelda’s Iron Boots. Thanks for reading and let me know your thoughts in the comments. Take it easy.